From images scratched in the catacombs of ancient Rome to aerosol-sprayed tags on modern railway bridges, graffiti has been with us for a long time.

Whatever form it has taken, graffiti has often told us something about the social, political and cultural context in which it was produced; and as an alternative form of expression it can give us a perspective that history books and high art usually do not.

In 2010 the Norfolk Medieval Graffiti Survey was established to undertake a large scale survey of early graffiti inscriptions in the county. Since then the project has spread nationwide and consequently the North West Historic Graffiti Project was set up with the aim of studying such inscriptions on buildings ranging from medieval to C17th.

Members of TAS were inspired and encouraged to play their own part in this by Carolanne King and Ellen McInnes, who have been running workshops on how to search for and record examples of old graffiti. Accordingly, earlier this year we began our own project at St Michael and All Angels Church in Mottram-in-Longdendale. The present church dates from the C15th.

When you know where to look, how to look and what you are looking for, it is surprising what you can find. We discovered circles, meshes, birds and animals on pews, walls and around doors and windows. This was the hidden history of the church and of the community it served; not the history told by the monumental stones and alabaster tombs of the wealthy, but a record of ordinary people – in some cases the very masons who had built the church itself, or modified it over the years.

Marks like the circles were often made near to doorways and windows to frighten off or trap evil spirits. The spirits would go round and round the circles and not be able to escape. Similarly, the meshes were supposed to act like fishing nets to snare them. Other inscriptions might have been simply “signature” marks, or in the case of the birds and animals the significance might have been a link to biblical stories.

The fact is  that the interpretation of the markings will become better informed and more reliable as more and more data can be collected. This is why it is important to carefully record, archive and ultimately share our finds. The finds from the Norfolk project, for instance, have begun to reveal trends such as the relative absence of  farm animals in pictures, in favour of the birds and animals of the forest; or the tendency not to overwrite earlier inscriptions, suggesting that the practice and significance of graffiti inscription was acknowledged and respected. A bigger picture is being formed that suggests the interior of a medieval church might have looked quite different to how we have imagined it in the past.

There is still work to be done at St Michael and All Angels and it is possible that new discoveries will be made at the Heritage Open Days on 8th, 9th and 10th September. 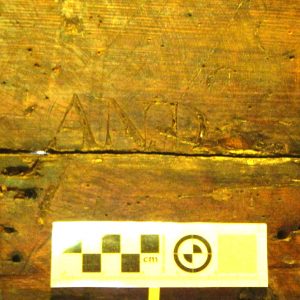 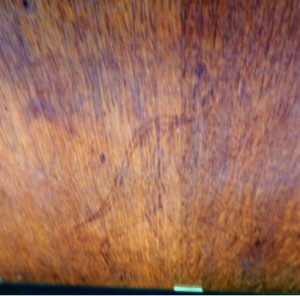 This bird and the animal in the next picture might be linked to Christian stories,….. or perhaps someone simply liked to draw birds and animals. 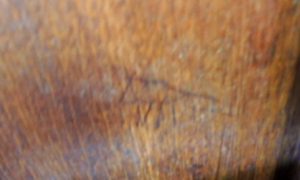