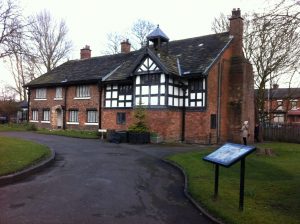 As the snow swirled around us on a cold Saturday in March, a group of us popped over to Clayton to take advantage of one of their open days.

The hall as we find it now is part Georgian/part Tudor and probably represents one side of a three or four sided structure built in the C15th on the site of an earlier building dating from the C12th. It stands on a moated mound that is Grade II Listed.

For over four hundred years it was in the possession of Lord Byron’s ancestors before they moved to Newstead Abbey, at which point it was bought by George and Humphrey Chetham – the latter the man who founded the school and library.

The volunteers who run the hall have done a magnificent job of renovating and dressing it so that the Georgian section is now a convincing reconstruction of a Victorian house, with plenty to see and to handle, while the older section has three exhibition and interest rooms upstairs and an excellent tea room downstairs.

The Victorian display was quite absorbing, but not surprisingly what appealed most to our group was the older section where we were able to feast on the sight of exposed beams and try to reconstruct the original building in our minds. Only a talk with slides from one of the volunteers and the prospect of tea and cake afterwards, managed to pull us away from our detective work.

We had a grand couple of hours which not only gave us new knowledge, but also a couple of good ideas for further activities. Keep an eye on the Clayton Hall website for news about future Open Days.