Mad Dogs, Englishmen (and Women) and the Occasional Smooth Newt

Never let it be said that TAS members would let a little thing like a heatwave stop them digging where no spade has dug before.

Well that’s how it felt on Sunday last when machetes might have helped us reach a site where we wanted to dig  two in a series of test pits. The normally boggy field had dried out a lot, but the vegetation was chest high in places. Removing the turf wasn’t easy either – most teeth are extracted with less pain – but fortunately one of the team had brought along her new, shiny and really quite sharp spade, so we let her do most of the work on our pit while we stood back and admired.

Both pits seemed to show quite good evidence of a trackway, but not at great depth and as yet we’re unsure of how much archaeology we’ve actually uncovered. Nevertheless it was some reward for our morning spent in the increasingly hot sun. Another highlight was our little visitor, a newt who literally dropped in to see us. The lucky little chap just avoided being troweled and seemed to enjoy basking in the attention if not in that heat. 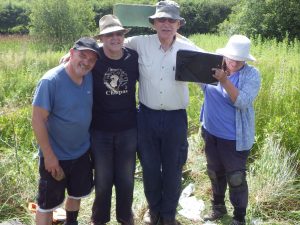 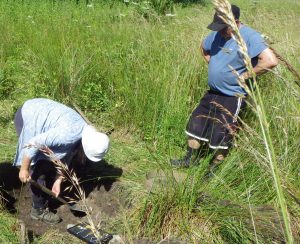 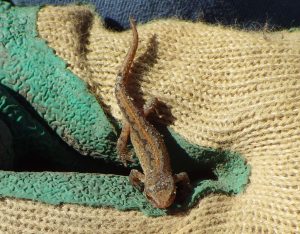