From Tombs to Towers

We get some interesting requests to carry out geophysical surveys and last week saw two good examples.

The first was in a local churchyard where someone had noticed a great disparity between the number of burials recorded and the number of graves evident. Of course, this is to be expected in any churchyard, where only a minority of parishioners could have afforded to erect a monument that would last (these graves dated from the early 1840s). In addition, we know that grave sites were re-used. Nevertheless, there were areas of this churchyard that appeared never to have been used at all and we were asked to investigate what lay beneath – maybe obvious signs of graves – maybe evidence of some earlier building structure. Unfortunately the results were inconclusive, with the large number of gravestone lying on the ground making it very difficult to get good readings.

The second took us much further afield – to Hoghton Tower, near Preston. This is a fortified manor house that originally dates from about the C12th, but the present building is C16th with a lot of renovation and addition carried out in the C19th. Before this the house had suffered some neglect. More interestingly, it had been subject to a siege by Parliamentary forces during the Civil War, as a result of which the old peel tower was destroyed.

A Castle Studies Trust grant is enabling an architectural survey in an attempt to better understand the Elizabethan structure of the building.

The University of Salford’s Centre for Applied Archaeology has been given the brief to carry out a dig, and we, in turn, have been asked to do some geophys in advance of that work. Here we had clear readings that should contribute to the ongoing project.

We just about got away with it weather-wise in what is turning out to be a pretty soggy summer for people working in the field! 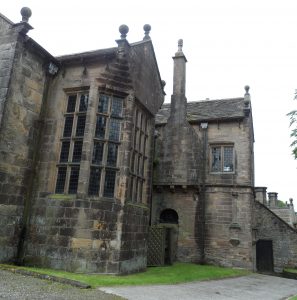 Part of the building as it exists today. 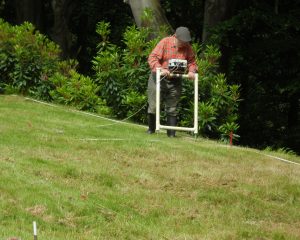 John carrying out the resistivity survey. 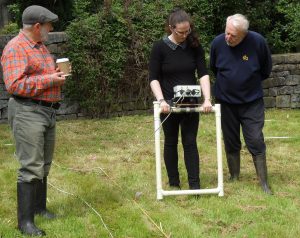 A member of staff from Hoghton Tower tries her hand at some geophys.

Posted in Uncategorized | Comments Off on From Tombs to Towers

We were out at our neolithic site digging a test pit to explore a feature found in our original dig. As is the case with these things, the failure to find what you’re looking for is not altogether a negative result.  It is information that contributes to the bigger picture. Sure enough, we failed to find the feature we were looking for.

However, in the process a lovely little find came to hand, the gorgeous flint thumbnail scraper pictured below.  One of the thrills of this kind of find is knowing that the last person to hold it could have lost or discarded it  5000 years ago or more. 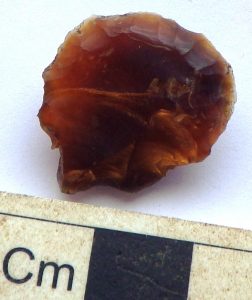 Posted in Uncategorized | Comments Off on A Lucky Find

Actually, the waters that have covered Lunt Meadows at various times in the last seven and a half  millennia have not always been still; nor have they been particularly deep. But, crucially, they have been there; and they have preserved beneath them secrets that have only been revealed in the last few years.

An excavation led by Ron Cowell, Curator of Prehistoric Archaeology at the Museum of Liverpool, has discovered evidence of a mesolithic settlement dating from at least 8000 years ago. In fact, a number of features seem to suggest that this was a well-organised dwelling site that had been used over a considerable period of time, although probably seasonally, rather than continuously.

We went over to the museum recently where Ron showed us how a special app that had been created for the project was able to bring the site “to life”, and better help us to appreciate some of the finds.

In addition to what the site tells us about mesolithic settlements, there were a number of instances where stones had been placed deliberately in what may have been some expression of belief. Interpretation can only be tentative at present, but these finds could, in time, prove to be a significant contribution to our understanding of mesolithic culture.

Later, Ron took us out to Lunt Meadows where he explained more about the context and showed us how the layers of fresh water clay and then marine clay had built up, effectively sealing the site until they began to uncover it in 2012.  Not only had the water helped to preserve the site from later use and deterioration, but those additional layers of clay acted as a shield against the ploughs that would have cut through the subsequently formed topsoil.

A fascinating day, made all the better by an expert guide, excellent company and a rather nice walk. 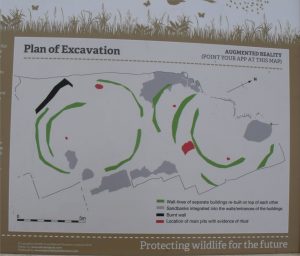 A plan of the site 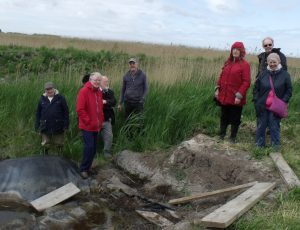 This shows the fairly deep accumulation of topsoil and then the grey layer of marine clay, from the salt water marsh, beneath it. Below that there is a layer of fresh water clay before the mesolithic “floor”. On the top, you can see a selection of prehistoric finds in the form of TAS members. 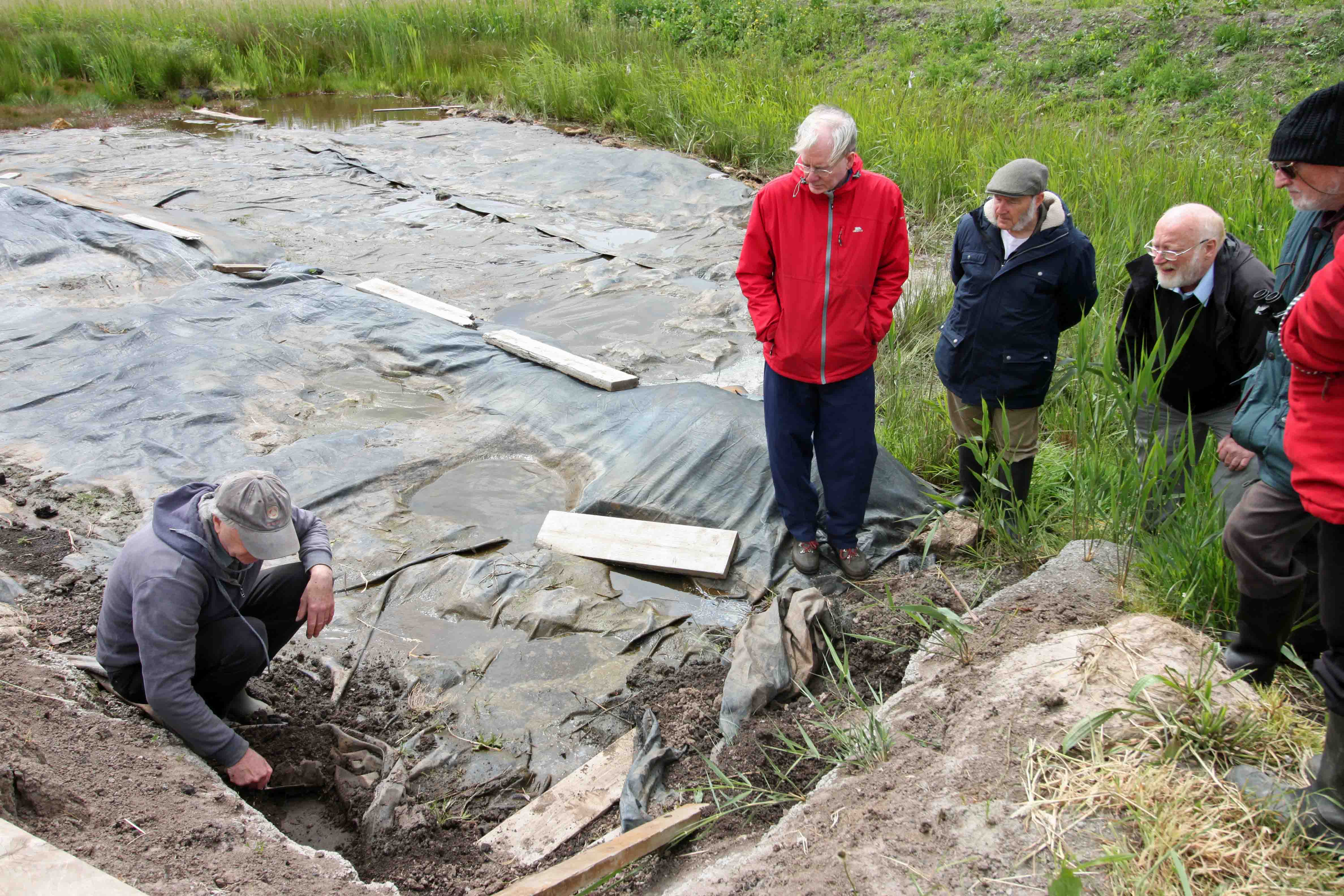 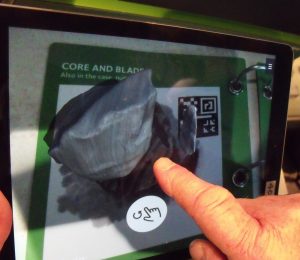 The use of photogrammetry and a QR code enables visitors to the museum to spin 3D images of the finds for better inspection.

Posted in Uncategorized | Comments Off on Still Waters Run Deep

Sometimes the strain of recording finds can get to the best of us.

Photographing the stones from our neolithic site affected one of the team so badly that he had to seek help (see pictures below).

But at least it shows that we have an active youth recruitment policy! 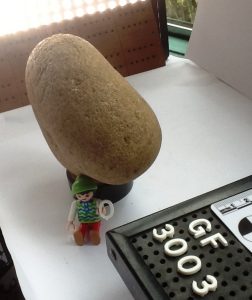 Come on now, Tommy! No sitting down on the job! 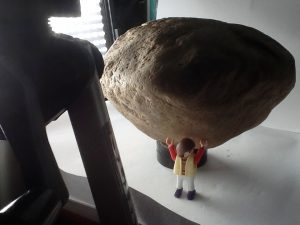 Do Health and Safety know about this?

Posted in Uncategorized | Comments Off on Sometimes……….

Last autumn Ann Clark took away for analysis 200 stones from our recently dug site in the upper areas of Tameside.  Carbon dating had already been carried out on samples from this site, putting it at late mesolithic/early neolithic.

These stones have now been returned with the news that 40 of them provide evidence of occupation around the neolithic period.

This is very exciting, of course, because it makes our site the only known, permanently occupied, neolithic site in the north west.

A full report is being drawn up and is presently being illustrated.

Below, an anvil stone – obviously aware of its sudden rise to the surface and to fame – poses for the camera. The second picture shows more clearly the pecking that provides evidence of working by an early Tamesider about 5000 years ago. 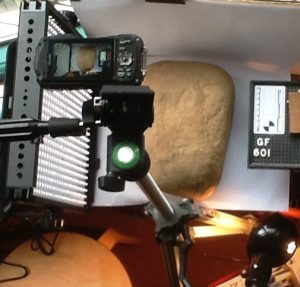 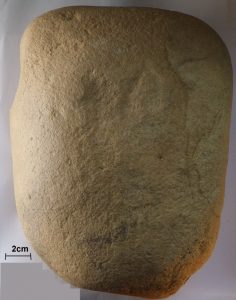 Posted in Uncategorized | Comments Off on Hard Evidence

Who Would Have Thought?

Our last post asked for thoughts on this small but beautiful find: 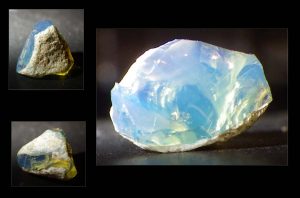 We had a number of responses and the consensus seems to be that it is a piece of slag from the process of smelting iron. Iron slag has a high silica content, but has different appearances dependent upon the properties of the ore and of the flux used in the smelting process. Accordingly, different colours can be produced.

Slag doesn’t usually look so attractive, but this piece benefits from being a small fragment which helps to show off its translucent quality.

Most slag from blast furnaces is ground down and used in building materials, particularly concrete. However, it has also been used in glass making. It was used from the C19th especially in the manufacture of pressed glass, or “slag glass”, as it lowered production costs and contributed interesting qualities such as colour and swirling patterns.

Someone raised the point that there had been Huguenots involved in glass production in the Haughton Green area in the C17th. That is not where this was found, but it opens up another interesting avenue for exploration.

For the record, someone also mentioned opal, which would have sounded so much nicer, but if it’s slag, then slag it is.

If anyone has anything further to contribute, please do so, either here or on our Facebook page.

Posted in Uncategorized | Comments Off on Who Would Have Thought?

This is a recent find from a multiphase site.

It is 6 x 9 x 5 mm, blue glass, an inverted pyramid covered partially with a form of cortex.

But what is it?

Answers on a postcard, by carrier pigeon or electronic thingummy! We’d just love to know.

Posted in Uncategorized | Comments Off on Small But Beautiful

Please see this flyer for news of the seminar to be held on Tuesday 11th December. 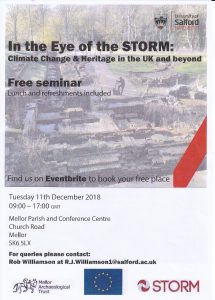 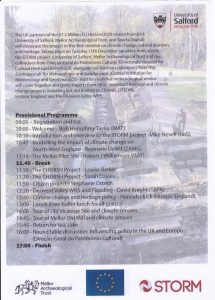 Posted in Uncategorized | Comments Off on Seminar at Mellor

Further to our recent news that we had won funding for an evaluation of some of the stones from our mesolithic/neolithic site in Tameside, we were happy to welcome Ann Clarke  to one of our gatherings, where she gave us a very interesting talk on stone tools.

Ann is a freelance archaeologist and lithic specialist with considerable experience, especially in Shetland and Orkney. She came down last week to look through the stones so that the assessment sample could be selected, but kindly agreed to talk to us first.

She covered a range of finds, their possible uses and how they were formed, stimulating some lively discussion afterwards.

The following morning it was down to work and Ann was tweeting “It’s not all pretty rocks. I’m currently in a garage in Manchester going through 1000 stone finds from excavation by @tasarch5”! It is certainly true that there is more to assessing stones than meets the eye.

The next step was to get the selection up to Scotland where Ann could carry out her evaluation and prepare a report.

We look forward to sharing the results on here at some point in the future. 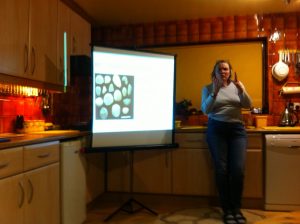 Ann explains how the Skaill knives pictured on the screen were formed and used. 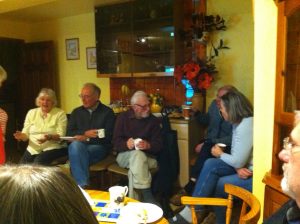 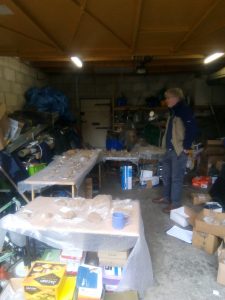 The garage – and the rocks – in question!

Posted in Uncategorized | Comments Off on Archaeology Rocks

Shedding New Light on the Past

Our Heritage Weekend at Mottram Church went very well indeed. The three days were  well-attended and we were able look for more graffiti as well as record examples already discovered.

While setting up on Thursday, a trip up the tower revealed some new pieces, but most of the finds have been on the pews. Some have been drawn, some carved, or compass-drawn, and many have been created using a sharp pointed instrument. The range of means by which the graffiti have been created has led to an interesting discussion on the nature of things carried by the congregation in their pockets!

Attempts at taking graffiti rubbings were less than successful (we have not given up!), but the acquisition of a super-duper new light meant that we were able to take good photographs  in some of the dimmest corners. Hopefully we now have a fairly full record of the graffiti in the church which we can contribute to the wider survey. 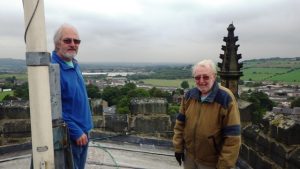 Taking in the view from the top of the tower. 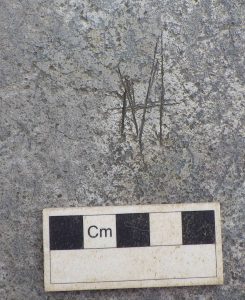 Three of the new pieces found this weekend. 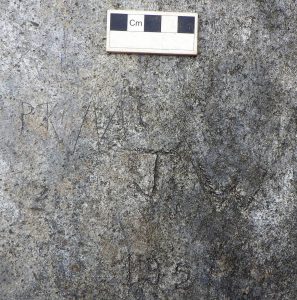 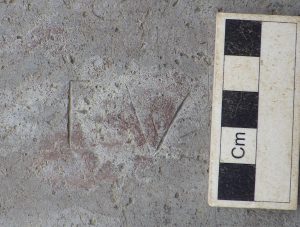